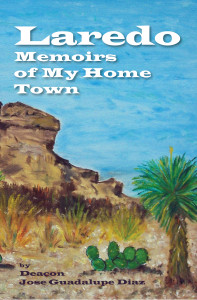 Laredo – Memoirs of My Home Town

Jose Guadalupe Diaz was born and raised in Laredo, Texas. Upon graduation from Martin High School, he enlisted in the U.S. Navy, serving aboard two aircraft carriers during the Korean War. He was ordained as a permanent Deacon by Archbishop Patrick Flores on June 7, 1987.

Deacon Diaz was active in the parish of St. John Berchmans for over fifty years, where he served in many capacities; chairman of the parish finance committee, school board member, and president of the Holy Name Society. He was employed for more than thirty years at Kelly AFB, in different positions including production counter, workload control specialist and as a budget analyst in the War Plans and Programs office. An avid golfer, he has played on more than 200 courses around the country, in Canada, and Mexico. For the accomplishment of playing golf in each of the fifty states, he appeared in Ripley’s Believe it or Not, in June, 2001.

Soon to be available through Amazon.com and Barnes & Noble
Distributed by Ingram