A MAN, A DREAM, A COMPANY -The History of American Security Life 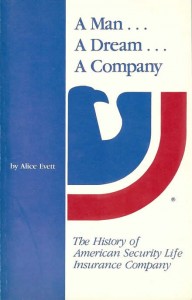 in 1931, the country was still in the throes of the Great Depression, and one of the direst problems for people with low incomes was coping with health problems which could wipe out in a day what little financial security they had managed to achieve. 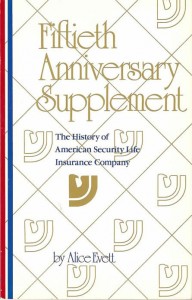 A young man of foresight studied the situation and developed a program to help cope with the dilemma. What S. E. McCreless of San Antonio came up with was a service for prepaying hospital costs, and making it available at charges as low as pennies a week.

From this small beginning, McCreless grew a company which produced full-fledged hospitalization insurance, life and accident insurance, with branch offices all over Texas and eleven other states, and a reputation not only as a pioneer in the industry but as a leader of integrity and substance.

These two volumes, published in 1980 and 1985, celebrate the history of the company, its founders and employees. Author Alice Evett (now Geron) was editor of publications there

from 1961 until 1973, and returned to the company later to write its definitive histories, and publish the books