NOT ALWAYS RIGHT, BUT NEVER IN DOUBT 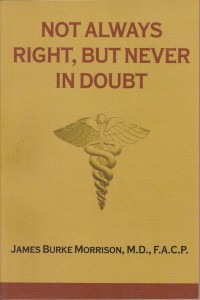 Dr. Morrison’s title comes from a quote of David Crockett, and it is a principle the doctor has applied to his life, both his medical career and his personal relationships. He writes, “I decided long ago that I would be myself, instead of a political person in medicine.”

Born in Center, in East Texas, he graduated from the University of Texas at Austin and the UT Medical School at Galveston, and interned at the University of Iowa.  Caught in the draft, he found himself in Korea making parachute jumps with a regimental combat team. He has recently retired after a long medical career in San Antonio.

His book tells of his family, but also includes a section of letters, both sent and received, which have been of amusement or significance in his life.