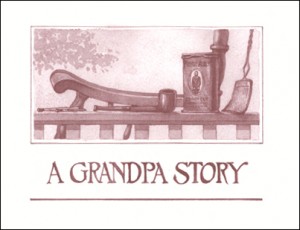 Commentary and illustration by Paul Hudgins

This engaging booklet was prepared for Paul’s grandchildren, but we persuaded him to expand the printing to a limited edition of 100 numbered copies.

The story was one his father told of a cattle drive in 1904 – possibly the last big cattle drive of the Old West. His father was five years old when his own grandfather took him on a cowpony a mile or so from home to see the trail herd gathered from small ranches around Post in West Texas on the “high plains” – ready to set out for the railhead at Colorado City. Recording the story as his father wrote it for him, Paul has added a word picture of the time and place, and fine drawings of the chuck wagon, the cattle, cowboy gear, the Hudgins home in Snyder, and the faces of his grandfathers, his father, and himself. In thirty pages, this is a story of West Texas as it was a hundred years ago. 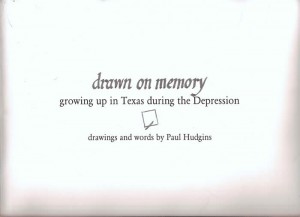 Growing up in Texas during the Depression

This charming book of reminiscences is a record of the author’s boyhood in Texas and his Army service in World War II.  A commercial artist, illustrator, book designer, and sometime writer, he has now made a book of his recollections, with hand-printed text to accompany the drawings. His career has taken him east and west and all over Texas, but he retired from the family ranch at Snyder in West Texas, and now lives beside Lake Dallas near Denton. 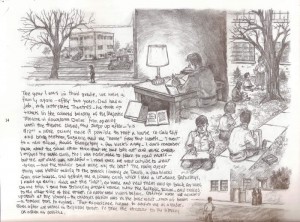