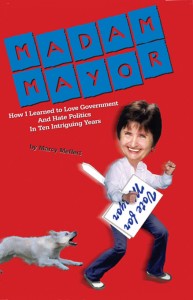 After 20 years as a military wife, mother of five, and community volunteer, Marcy Meffert retired from full-time homemaking in 1974 to begin a new career – first as a free-lance writer and editor, then in 1994 in what she calls the ultimate volunteer job of serving on the Leon Valley, Texas, City Council. She served four years as a councilmember and six as mayor and currently writes a column for the San Antonio Express News.

On behalf of her city she was active on regional and state levels in leadership positions, including chairman of the Greater Bexar County Council of Cities, chairman of the Alamo Area Council of Governments, and president of the Texas Municipal League Region 7.  In 2004, she retired from public service to write this book, which she hopes will encourage more people to get seriously involved in government as candidates, election workers, and/or at the very least, as voters. She writes with an inimitable sense of humor and shows the human side of politics at the grassroots level.