Weird Al strikes again. The only dissent I have from this is that yes, I firmly believe in the serial or Oxford comma. There is a reason for it existing, and I WILL ALWAYS apply it to Watercress and G&A books. You have been warned.

When in the Course of publishing events, it becomes necessary for writers to sever their ties with the industry that is supposed to have “nurtured” them, a decent respect to the opinions of mankind requires that we should declare the causes which impel those writers to the separation.
We hold these truths to be self-evident, that all writers should have an equal chance to find readers. That their successes or failures should be dependent upon their own actions and their own choices. That they should be paid fairly for their work. That they should have control over the works they produce. That they should have immediate and accurate access to their sales data. That they should be paid promptly. That they should not be restricted from reaching those who may enjoy their work. That whenever a publisher or retailer becomes destructive of these ends, it is the Right of Authors to abolish all connections with the offending parties.
The history of the legacy publishing industry is a history of repeated injuries and usurpations, all having in direct object the establishment of an absolute Tyranny over writers. To prove this, let Facts be submitted to a candid world. …

Read the whole discussion – it’s worth it. 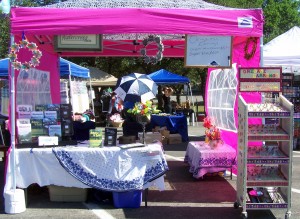 Well, on those outdoor venues to sell books … mine or other Watercress/G&A authors. Although I do have to share it with Paper Blossom Productions…

It’s very … pink. And visible, in an open-air market where just about every other vendor has a white, or cream-color, or blue canopy. Bright pink and a black and white zebra-striped top are … visible.

And that’s the name of the game, in marketing. Being visible.

Although – it didn’t quite block all the UV rays. We both were slightly to rather sunburned after this last weekend’s turn at the Bulverde/Spring Branch Spring Market, in the parking lot of Beall’s at Bulverde Crossing and Hwy. 46 W.

We’ve just been given our booth assignment for the San Antonio Book Festival, which will be Saturday, April 5th from 10 AM to 5 PM at the Central Library in downtown San Antonio. The booths are set up in the parking lot at the corner of Navarro and Augusta – we’ll be in Booth #18. There will be heaps of book-oriented activities going on all day at the Library and the Southwest School of Art – more here!

10:00-11:30 – Aubrey Carter, with her beautifully-illustrated children’s book – Marilee the Manatee!

1:00-2:30 – W. Paul Burrier, who has just brought out the second in a series of five books. This is The Confederate Military Commission Held in San Antonio. Mr. Burrier does not yet have a website

And I will be there throughout the day, with my own books, and information about how to go about publishing – either through Watercress or G&A – or any other means of publishing. See you there!

When a writers’ organization forgets that its primary goal should be to assist and support writers and starts trying to look more politically correct and then to force that image on all members or else they be publicly shamed, it has outlived its time.
(From a comment by Amanda, at the discussion thread here.) For an explanation of glittery hoo-haa, go here – and remember, you have been warned.

Now, aren’t you all glad that I have taken to writing historical fiction? Those organizations which I am interested in joining, or semi-qualified to join based upon scribbling moderately competent, interesting, and OK-selling genre fiction (Women Writing the West, or the Historical Fiction Society) are not having these nuclear-melt-down-sink-through-to-the-core-of-the-earth perturbations. Or at least, none that I know of – mostly because I am interested in writing, not organizational politics, because – what was the reason for the writers’ organization again? Oh, yeah – the care and feeding of writers, and their economic interests, not some kind of neo-Stalinist clique imposing a kind of savage Mean Girls political correctness upon the membership and exiling all those who don’t or won’t go along with it.
END_OF_DOCUMENT_TOKEN_TO_BE_REPLACED

More information here, in this examination of independent publishing. Pretty well tracks with my experience over the last seven years or so.

(A repost from the archive of one of my other blogs, ruminating on identity and writing)

The weird turn professional, and apparently write a memoir about it, which is all very nice when it sells a LOT of copies, and the writer becomes FAMOUS and sells a mega-jiga-million copies, and everyone remembers that they knew you when – maybe. Journalistic fabrication is so last year (Stephen Glass, Janet Cooke, whatsisface at the NYT), the current flave of the moment must be the memoir; One’s own life, but with improvements.

The fun begins when everyone who knew you when — the people next door, brothers and sisters, employers, co-workers, ex-spouses, friends and former friends score a copy and begin to realize that there is a whole ‘nother reality reflected there, one with which they were completely unacquainted. So the Oprah Winfrey/James Frey ruckus was just one of the most current disconnects between real life and life remembered with advantages. The lesson ought to be for memoirists to linger meaningfully in the general vicinity of verifiable facts, either that or wait to write it all when everyone else is dead and can’t argue the point with you. If you really can’t wait that long, perhaps it would be less embarrassing to just call it fiction, loosely based on your own life. Even if the stuff that really happens is sometimes stranger than you can ever make up.

Some time past there was a story about another writer — somewhat less well known since Oprah didn’t personally have to rip him a new one on national television— who wasn’t a Native American at all. What is it with wanting to be a Native American, all that mysticism and wilderness wisdom? And Timothy Barrus wasn’t the first, (Grey Owl, anyone?) only being a porn writer may have been a little less embarrassing than the resume and club membership of this best-selling but unfortunately fraudulent Indian. And Carlos Castenada and Rigoberta Menchu still have passionate defenders willing to deny or discount certain uncomfortable findings.

Really, I feel quite sorry for people who begin with a little fib, a touch of exaggeration and eventually wind up believing it; some of them do not take contradiction well, and it is way too late in the game to get a writer and memoirist like Lillian Hellman a little painful cross-examination (But Mary McCarthy tried, anyway.)

Fraudulent memoirists like Frey and Barrus may be a passing evil, best selling or not. Grey Owl and Asa Carter, although not as advertised, were possessed of a lovely and sympathetic writing style and may even have done good with their output, in the long run. But Menchu and Hellman, with the deeply politicized aspect to their writings and public personas probably have not. After contemplating how their books inflamed or warped the perceptions of certain public issues, it is a positive relieve to contemplate Ern Malley and Penelope Ashe, two last literary frauds which were done for no more reason than to make a point, and for their perpetrators to have a little fun putting one over; A self-consciously literary magazine called Angry Penguins is just begging to be sent up, and as for Naked Came the Stranger – it was proved in 1969, and for a hundred years before and ever since, that trash with a naked woman on the front cover will sell.

Just to see if this goes to Facebook! Put on your safety goggles and hold tight!

Later – Sigh. Doesn’t look like it. Back to work on an AUTOMATIC PUBLISH TO FACEBOOK widget that does work, without requiring thirty different steps…